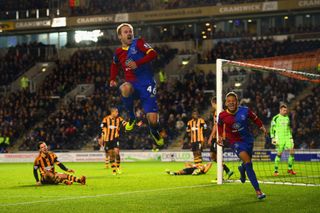 Steve Bruce's side occupy the relative safety of 11th spot but a run of three league defeats on the bounce, in which they have failed to score a single goal, has narrowed the gap between themselves and the bottom three.

Palace, meanwhile, have climbed the table to 16th and a home victory on Tuesday would underline the contrasting recent fortunes of the two sides.

When they met in November, City held a 10-point advantage over Palace, but if the London club can complete a league double over the KC Stadium outfit, they will draw level with them.

And history on the hosts' side, too, with Hull having returned winless from their last 10 trips to Selhurst Park - a record stretching back to 1986.

Both clubs were in action on Saturday in the fourth round of the FA Cup, City earning a 2-0 win at Southend United, managed by their former boss Phil Brown, while Palace were beaten 2-1 at holders Wigan Athletic.

That defeat will allow Tony Pulis' men to focus exclusively on the fight for top-flight survival as Palace seek to end their abysmal record of having been relegated from the Premier League on each occasion that they have competed in it.

Pulis masterminded a 1-0 victory over his old employers Stoke City last time out in the league, Jason Puncheon atoning for his penalty miss against Tottenham by netting the decisive goal.

Hull were beaten 1-0 at Norwich City, a defeat compounded by Tom Huddlestone's late red card, meaning he missed the trip to Roots Hall.

The midfielder is likely to start versus Palace, while Robbie Brady, who featured from the bench against Southend, will also come into consideration for his first league start since early December following a groin problem.

Much has been made of Palace's sizeable squad - described by one study as "the biggest in Europe" - and Pulis has relatively few injury concerns.

Kagisho Dikgacoi and Jerome Thomas (both calf) could return, while Cameron Jerome, who was ineligible to face his parent club Stoke in the previous league game, is set to start in attack.