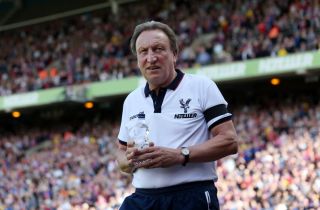 Palace have been impressive since Warnock took the reins in late August, picking up two wins and two draws from their four league outings to help silence some of the criticism surrounding Tony Pulis' departure.

A League Cup exit against Newcastle United is the only low point Warnock has endured since his return to Selhurst Park.

The former Sheffield United manager takes his Palace side to the KC Stadium with Hull in the midst of a difficult run of results - having failed to win a league game since the opening day.

Hull's tricky run of form, which has seen them throw away leads in frustrating draws against West Ham and Newcastle United, is in contrast to a hugely impressive campaign last time out for the FA Cup finalists.

Warnock feels Bruce can consider himself unfortunate not to have been named manager of the year last term and warned his side not to get carried away by their own upturn in fortunes.

"It will be as tough as they come, I know Tony [Pulis] got manager of the year but I thought Steve Bruce was head and shoulders the best manager around last year," Warnock said on Thursday.

"Getting a team like Hull to the [FA Cup] final is fantastic."

Reflecting on his objective of staying in the Premier League, Warnock continued: "Absolutely, apart from the top four teams everybody is probably on the same wave length.

"Everybody looks at the other end of the table every week. Before we played Everton we were bottom of the league, it puts it into perspective. You don't get carried away."

Bruce spoke on Thursday of a frustration at not having more points on the board at this stage of the season, having twice led against West Ham and been 2-0 up against Newcastle.

Having drawn both those games, Hull recovered from a two-goal deficit against champions Manchester City last time out only to go down 4-2.

"Apart from Crystal Palace, the teams we did very well against [last season] were the ones in and around us," Bruce explained.

"Crystal Palace will be looking at it in exactly the same we do. You've got more chance of taking something off Crystal Palace than you do against Man City last week.

"So it's a game we've got an outstanding chance in. They did the double over us last year and under Neil, he's experienced and they've brought in one or two.

"They're a very good side and they'll be a stern challenge."

Allan McGregor joined long-term absentee Robert Snodgrass on Hull's injury list this week although Warnock has a fully-fit squad to choose from.