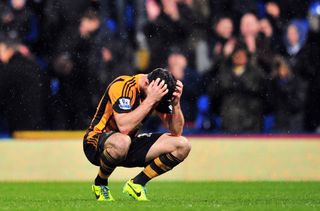 Following a solid start to the campaign, Steve Bruce's men have won just once in their last 10 Premier League matches and sit only four points clear of the drop zone.

The solitary victory in that run was a 6-0 demolition of Fulham, but Hull have not found the net in the league since that triumph, and recent defeats to fellow strugglers Norwich City and Crystal Palace could come back to haunt them at the end of the season.

With that in mind, Hull will be hoping new signings Nikica Jelavic and Shane Long, who are set to make their home debuts against Spurs, can open their accounts for the club.

Tottenham had been on a six-match unbeaten run in the Premier League until Manchester City brought them crashing back down to earth by claiming a 5-1 victory at White Hart Lane on Wednesday.

The result was Tim Sherwood's first league defeat as Spurs boss and the club's heaviest since Liverpool won 5-0 in at the Lane to seal the fate of former head coach Andre Villas-Boas.

These sides met twice in the space of four days back in October, with Tottenham winning 1-0 at the KC Stadium in the league before requiring penalties to reach the League Cup fifth round following a 2-2 draw.

Hull will be without first-choice goalkeeper Allan McGregor, who was sent off after a collision with Stuart O'Keefe at Palace, as Steve Harper prepares to return to the starting XI.

Bruce has also recalled Eldin Jakupovic from his loan at League One outfit Leyton Orient to cover for the absence, and will have to change things around in midfield with Jake Livermore ineligible to face his parent club.

Jan Vertonghen, Paulinho (both ankle), Sandro (calf) and Younes Kaboul (thigh) are all nearing a return to the first team, but missed out on Wednesday's defeat to Manchester City, while Andros Townsend (hamstring) is a doubt.