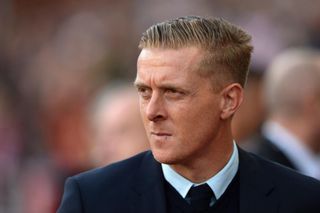 A controversial first-half penalty, converted by Stoke City's Charlie Adam, became the focus of the post-match analysis after Jonathan Walters had netted a late winner for the hosts.

Monk was scathing in his assessment of the spot-kick award - stating that Victor Moses had "cheated the referee" when he went down under a challenge from Angel Rangel.

The Swansea boss was later contacted by the Football Association to clarify his post-match comments.

With Leicester the visitors to the Liberty Stadium this weekend, Monk claimed his full focus was now on returning to winning ways in the Premier League.

After both clubs had made promising starts to their respective campaigns, the Welsh club have now gone five league games without a victory, while last season's Championship winners have not taken maximum points since their famous 5-3 success against Manchester United.

With the fallout from Sunday's controversy set to rumble on, Monk has been eager to ensure all attention is on Saturday's clash as the two sides meet for the first time since their second-tier fixture in 2011.

"We've moved on from last weekend. We came back in Tuesday and went to work," Monk said.

"It's all about Leicester and we've focused on that all week.

"It's a big game for us. We've gone five games without a win but we have been unlucky not to pick up more points.

"We've been playing well but we just need to be a little bit more clinical in front of goal."

Leicester were the victors in their last meeting with Swansea - Darius Vassell and Bruno Berner on target in a 2-1 win three years ago - and another triumph for Nigel Pearson's side would see them leapfrog Saturday's hosts in the table.

Defeats to Crystal Palace and Newcastle United, as well as a 2-2 draw with Burnley, followed their win over Louis van Gaal's men at the King Power Stadium.

However, Leicester were undone by late goals against Burnley and Newcastle United, with Pearson urging his side to make the most of their opportunities in south Wales.

"The margins between success and failure are getting smaller these days. You have to take your chances," he explained.

"In the last three games we haven't got what we deserved but we won't dwell [on it], we'll prepare right for Swansea.

"It's a long season and so far we've acquitted ourselves well."

Matthew Upson (ankle) is Pearson's only injury concern, while the likes of Jordi Amat, Leon Britton (both knee) and Dwight Tiendalli (groin) remain out of action for Swansea.