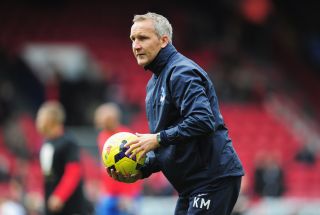 Palace sunk to the bottom of the Premier League table when Sunderland beat Newcastle last Sunday and have just three points to their name after the first nine games on their return to the top flight.

Caretaker boss Keith Millen has taken the reins after Ian Holloway's departure and his first game in charge ended with a 2-0 defeat to Arsenal in a London derby at Selhurst Park last Saturday.

Millen will take charge again for the clash at the Hawthorns as Palace continue their search for Holloway's successor and he will be hoping to mastermind an upturn in fortunes.

Palace have lacked a cutting edge on their travels, having scored just twice in four away games in the Premier League.

But Millen is eager to build some momentum, starting with the showdown with Steve Clarke's Albion.

He said: "There's enough points to play for to stay up. If you can get even a point Saturday, it's a start. We aren't not cut adrift yet."

Midfielder Jonny Williams (ankle) is closing in on a return to the squad, but centre-back Paddy McCarthy (groin), striker Glenn Murray (knee) and defender Jack Hunt (ankle) all remain sidelined.

The two sides have not met in the Premier League since an entertaining 2-2 draw at the Hawthorns back in February 2005.

Albion are without a win since beating Manchester United at Old Trafford just over a month ago, but they held leaders Arsenal in their last home game.

Clarke's side felt the force of the Luis Suarez and Daniel Sturridge partnership when they were beaten 4-1 at Liverpool last weekend.

A lack of goals from his strikers has been a problem for Clarke, as England Under-21 international Saido Berahino is the only one among them to have scored this season.

Victor Anichebe and Nicolas Anelka got the nod to start at Anfield, but Shane Long and Berahino will be hoping for a recall.

Winger Scott Sinclair could return to the Albion squad after a spell on the sidelines due to a hamstring injury sustained in the victory at United.

And fellow loanee Morgan Amalfitano could also feature despite limping off at Anfield with a knee problem, but back-up goalkeeper Lee Camp will not be involved after he joined Championship side Bournemouth on loan.