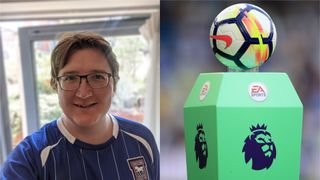 The Fantasy Premier League (FPL) has named a new winner for the 2019/20 season after the original was disqualified for a breach of the game’s terms and conditions.

Josh Bull, a researcher in mathematical oncology at Oxford University, has replaced Bulgarian fantasy football manager Aleksandar Antonov as victor two weeks after the end of the season.

The exact reason behind Mr Antonov’s disqualification has not been revealed by FPL.

“The team formerly occupying the No 1 position has been removed from FPL due to a breach of our terms,” the league said in a statement.

In a YouTube video, Mr Antonov said: “Somehow and in some way things I said in a private Facebook Messenger chat several months ago with five or so of my friends found its way to the EPL, and after looking at it the EPL decided to exercise their right to administer the game and remove me as the winner.

“The reason for my disqualification is a moment of frustration with a player put into words written between friends.”

Mr Bull, who originally came second with 2,557 points to Mr Antonov’s 2,575, received an email from the Premier League on Tuesday morning telling him the news.

“It still hasn’t really sunk in, I thought it was all over a few weeks ago,” the 29-year-old told the PA news agency.

Following end of season checks, final standings have been updated. We can confirm that Joshua Bull is the official 2019/20 #FPL champion.— Fantasy Premier League (@OfficialFPL) August 11, 2020

“I don’t have a clue what’s happened, I don’t know anything beyond what the Premier League have announced on Twitter.

Mr Bull, an Ipswich fan who now lives in Oxford, is the winner of FPL’s top prize, which includes a seven-night holiday and VIP hospitality tickets to two Premier League matches.

“In itself that’s a surreal thing at the moment as we don’t know yet if there will be any crowds there or whether I’ll actually be able to go to those games or not,” Mr Bull said.

“I think the most useful prize will be the fantasy football stress ball – that could be quite handy.”

Mr Bull credited his success this season to putting faith in Leicester players, including the league’s top goalscorer Jamie Vardy, early on.

“Arguably I kept a bit of faith in Leicester for too long and kept them longer than I should have done,” he said.

Earlier in the season chess world champion Magnus Carlsen had been number one in the FPL table, and PA asked Mr Bull if his role as a mathematician helped him this season.

“A lot of people have asked me if I have an algorithm for choosing players. I wish I did but I don’t,” he said.

“I do think what being a mathematician and being a chess player have in common is a kind of strategic thinking and trying to plan ahead.

“Having said that I’m sure there are plenty of people in the top 10 who are awful at maths and awful at chess and are brilliant artists or anything else – I’d love to see the statistics on that.”

Asked for his top tip for FPL managers before the start of the new season on September 12, Mr Bull said: “As a mathematician I think a lot about things like regression to the mean.

“My big tip would be to pick the players you think will do well and stick with them. I didn’t take any points hits (to make extra transfers) throughout the season.”