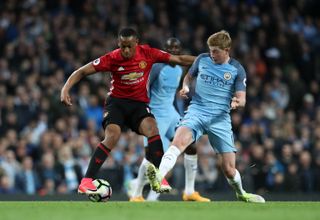 With just a handful of games left to be played in the Premier League, you might be wondering who the best Fantasy Premier League managers are backing, with mini-league titles up for grabs.

We’ve analysed the squads of more than 250 bosses who have finished in the top 10,000 in at least five previous seasons to show you which players are the most popular among them.

The result is a team of players popular with the FPL elite which you could feasibly have assembled at the start of the season with your budget.

Manchester in the Middle

Those with a keen eye will have noticed that this is a midfield dominated by the Manchester clubs, with Kevin De Bruyne, Anthony Martial, Bruno Fernandes and Phil Foden all enjoying favour with these managers.

In part, this is likely to be down to the relatively easy-going nature of both Manchester City and Manchester United’s fixture lists – neither side will face any of last season’s top six.

Martial and Fernandes have been two of Ole Gunnar Solskjaer’s standout players in this period, racking up nine goals and six assists between them since the Premier League’s resumption.

De Bruyne, meanwhile, is by a distance the season’s most effective FPL player, with 226 FPL points in total and 48 of those in the seven games since lockdown.

And Foden – still cheap at £5.5m – has scored four goals since the restart. The elite are shopping in Manchester right now, and with good reason.

Nick Pope has quietly emerged as a potential number one goalkeeper for England, as well as for elite FPL managers.

The 28-year-old has amassed 14 PL clean sheets with Burnley this season, level with Man City’s Ederson in the race for the golden glove.

Pope reinforced his credentials with a fine display against Liverpool at the weekend, making a season-best eight saves as the Clarets earned a point at Anfield.

At £5m it’s no surprise to see 46% of our elite bosses selecting the stopper for their squads, especially with Wolves, Norwich and Brighton to come.

Pope is also the top-scoring goalkeeper when it comes to FPL points in the 2019-20 season, with 160 so far.

While the top managers have been taking the cream from two established elite clubs, they have found the perfect forward in a side that has lofty ambitions too.

Wolves still have an outside chance of a Champions League place with three games to go, and look well placed to return to the Europa League should they fall short of Europe’s premier club football competition.

In large part their success can be attributed to the 16 league goals of Raul Jimenez, who has followed up his debut season in the division with an even better goals return.

The Mexican has notched three in six games since the restart, and chips in handily with an assist from time to time as well.

At £8.1m he can firmly be categorised as a mid-price option who produces consistent returns in an unpredictable division, so the fact that 85.5% of our elite managers have him in their squad is only to be expected.