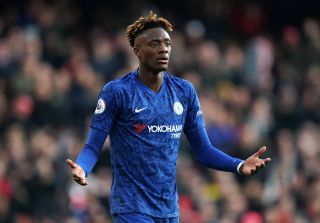 Tammy Abraham has been the Fantasy Premier League’s most transferred player after a breakout season for Chelsea, and while transfers out count towards that total, there are plenty of reasons to keep him in your long-term plans.

Over the 2019/20 season the England striker has been transferred in or out almost 10 million times, with his season-high ownership – more than 3.5 million – coming in gameweek 13.

In that time his price has gone from £7m to £8m, before dipping to £7.6m again – but who else has endured such ownership changes, and why should you keep the faith in Tammy?

Managers couldn’t get enough of Abraham at the start of the season, and with seven goals in a three-game stint, you could hardly blame them.

Recently however, he has been shunned by a plethora of managers after the goals dried up and injury took its toll.

The 22-year-old scored 10 goals in his first 13 gameweeks of the season, notching just three since – but his Threat statistics suggest his performance has remained consistent.

Threat measures the quality of a player’s chances, and therefore acts as a barometer for how well they are playing regardless of goal tally.

Abraham’s tally measured 522 in his first 13 gameweeks and 555 over the weeks since – suggesting he was almost certainly overperforming early in the season but has been unlucky to be underperforming since.

Furthermore, Abraham’s price has dropped to £7.6m making him a more appealing prospect.

The forward has recently suffered a further injury setback but, with his return date as yet unknown, will be worth keeping an eye on in the coming weeks. Could the league’s most transferred player be crucial in the run-in?

The reason Manchester City’s Kevin De Bruyne is so high on this list is his recent popularity, the Belgian owned by more managers than at any stage so far this season (3,983,614).

De Bruyne’s ownership rose and fell earlier in the season, despite consistent performances, before climbing to the point it’s at now – his price rising above £10m probably put a few managers off, but they’re not shying away now.

The midfield maestro’s record of seven FPL assists in his last 10 games, as well as a couple of goals, has been enough to encourage millions to back KDB despite his blank in GW28.

After GW28, the Belgian’s side face Manchester United, Chelsea and Liverpool before a run of more favourable fixtures. Our advice? Wait until GW33 before banking on De Bruyne.

The third biggest mover this season has been Liverpool’s Sadio Mane, whose ownership fell at a similar rate to Abraham’s in recent weeks but is still owned by almost 25 per cent of players.

Having only recently returned from an injury himself, the key reason for the £12.3 million forward’s declined ownership may well be due to his fellow Reds attacker Mohamed Salah (£12.8 million) – who has regained the faith of FPL managers with five goals in his last six games.

With Mane scoring in his last two though, and favourable fixtures against Watford and Bournemouth up next for Liverpool, both should be rightly treated as hot property.