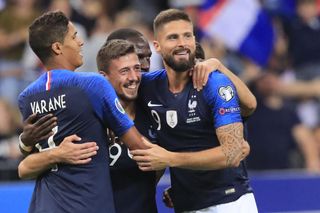 World champions France saw off Andorra 3-0 in Saint-Denis to keep the pressure on at the top of Euro 2020 qualification Group H.

Kingsley Coman and defender Clement Lenglet scored in each half, with Antoine Griezmann also seeing a penalty saved.

However, with Turkey winning 4-0 away in Moldova, Didier Deschamps’ side now find themselves second in the table on head-to-head record – but three points clear of Iceland, who were beaten in Albania.

After both national anthems were played without a hitch, unlike before the Albania game on Saturday, Lille forward Ikone, who scored on his debut last time out, saw an early chance bundled behind.

Pointless Andorra had been were denied what would have been a hard-earned draw away to Turkey by a late goal, and initially looked to take the game to their hosts.

However, France’s dominance of possession soon paid off as Coman opened the scoring in the 18th minute.

Ikone played a through-ball for Coman and the Bayern Munich winger held off a defender before slotting past the goalkeeper.

France remained on the offensive, and spurned a chance to make it 2-0 just before the half-hour mark.

Griezmann was pulled back by San Nicolas as he turned into the penalty area. However, the Barcelona forward – who hit the crossbar with a first-half spot-kick against Albania – saw his effort saved.

Despite not making the most of their opportunity, Les Bleus continued to press.

From a corner Ikone’s effort was almost deflected past his own keeper by Andorra midfielder Joan Cervos.

Centre-back Raphael Varane tried his luck from distance, with Gomes making another impressive save at full stretch.

Andorra continued to sit deep in the start to the second half, and were punished when Lenglet scored his first senior international goal in the 52nd minute.

Griezmann swung across a deep free-kick from the left and Lenglet got up to power a header into the top corner.

Gomes was soon called back into action to save Coman’s header from Sissoko’s ball in.

Spurs midfielder Sissoko then saw his header from a Griezmann free-kick come back off the crossbar.

Coman then somehow also managed to fire a shot up onto the frame of the goal at close range after connecting with a cross from Digne.

France finally made another breakthrough in added-time when Monaco forward Ben Yedder knocked the ball in after Nabil Fekir’s free-kick had been touched onto the post by Gomes.