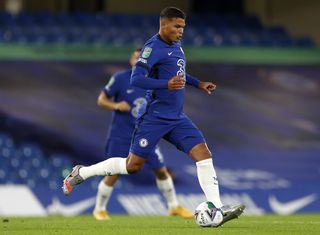 Veteran centre-back Silva bossed Chelsea’s backline from the off as Lampard’s men overwhelmed Barnsley 6-0 in the third round of the Carabao Cup at Stamford Bridge on Wednesday night.

The 36-year-old will doubtless endure plenty sterner tests as Chelsea look to accelerate Lampard’s rebuild, but the west London boss was delighted with his new linchpin’s immediate impact.

“It was a perfect 60 minutes for him,” said Lampard, of Silva’s accomplished Chelsea debut.

“He will show the qualities he has. Of course, he will get fitter and better.

“He also gave us something – for me on the night, in the dressing room and on the pitch – of a leader with authority of his demands on others.”

Silva is undergoing a crash course in English to boost his communication skills, but the multi-lingual defender has already insisted football’s universal language translates between team-mates of differing tongues.

Lampard insisted that ethos already shone through on Wednesday, with Silva exhorting his team-mates and adding obvious shape to Chelsea, whether in or out of possession.

“He can’t even speak the language at the minute but that’s not even a problem because his presence and the way he commands people around him is already showing that to me in training and in our game,” said Lampard.

“I am very pleased with Thiago. It is what I expected of a player of his level but it is very refreshing to have him here at the club.”

Kai Havertz bagged a hat-trick to get of the mark on the goals front for his new club, as Chelsea swept past their outclassed Sky Bet Championship opponents.

Tammy Abraham, Ross Barkley and Olivier Giroud all found the net too, as Lampard’s mean coasted through on home turf.

Ben Chilwell came off the bench to tee up Giroud’s goal with a fine cross, in another fringe benefit of an encounter Lampard had pounced on to boost match fitness among his frontline stars.

Hakim Ziyech and Christian Pulisic are still to come back into the mix when fit, while goalkeeper Edouard Mendy also to be added to the mix having completed his £20million switch from Rennes.

Toni Rudiger’s absence from two-straight Chelsea matches could see the Germany defender head away from Stamford Bridge on loan before the October 5 transfer window.

Our first of the night, his first of the season! ⚽️@tammyabraham ice cold in front of goal! 🥶 pic.twitter.com/SPsrz4hJ1i— Chelsea FC (@ChelseaFC) September 24, 2020

Lampard has however insisted it is too early to read into selection calls just three games into the new campaign.

“Callum did well, it’s not easy when you’re coming in and haven’t had so many minutes,” said Lampard.

“But I thought in parts he looked fresh and sharp and he was pressing hard and he showed really good work ethic.

“I was really pleased with Callum and I thought he had a good night.”