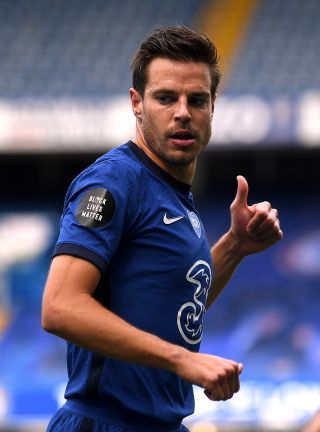 Frank Lampard has hailed “amazing” captain Cesar Azpilicueta for setting the standard at Chelsea this year.

Azpilicueta has featured at right-back, left-back and in central defence at Stamford Bridge this term, as Lampard’s Blues sealed a fourth-place Premier League finish and Champions League qualification.

The 30-year-old will now lead Chelsea into Saturday’s FA Cup final against Arsenal, looking for a seventh major winners’ medal with the Blues.

Lampard has leaned on the versatile Spain defender’s adaptability and leadership all season and paid tribute to the former Marseille man’s pivotal west London impact.

“To coach and manage a player you have played with is a very different situation, but it has been easy with Azpi because of the way he has been,” said Lampard.

“His level of performance and impact on the group as captain, I can’t understate it. It has been amazing.

“His performances for a huge part of the season, his attitude, his application every single day; it is an absolute standard for any young player.

“He is an epitome of the club. The unfortunate thing for us, and everyone, is that we don’t have our fans in the stadium.

“Because when you have a player like Azpi, he is the one fans look at and say ‘look at that, that’s how we feel about Chelsea Football Club’. He is that, and he is a captain for that reason.”

Chelsea will hope N’Golo Kante can shake off any lingering effects of his hamstring problem to be fit for Saturday’s Wembley battle.

The France World Cup-winning midfielder returned to full training last week, but was not deemed quite ready for Sunday’s final Premier League clash with Wolves.

A return for Kante would boost Lampard’s options at the base of midfield, with Jorginho and Mateo Kovacic having worked in tandem in recent weeks.

Brazil forward Willian will be another doubt for the Blues, having missed the weekend’s 2-0 win over Wolves with a late ankle problem.

Mason Mount’s free-kick and Olivier Giroud’s streetwise finish sealed Sunday’s Wolves win, leaving Lampard delighted to have secured Champions League qualification – but wishing Chelsea could have done so in front of their fans.

With the FA Cup final to be held behind closed doors too, Lampard took a moment to thank the Blues supporters for sticking with him in his maiden campaign at the Stamford Bridge helm.

“Not having the fans here, it’s important for me to say that it was a moment I would have loved to enjoy with the fans at the end, because we have been very together this year,” said Lampard.

“The support of the fans at difficult times and inconsistencies have been huge.

“I want thank them from afar. The achievement of reaching the top four is for them, and we look forward to having them back.”