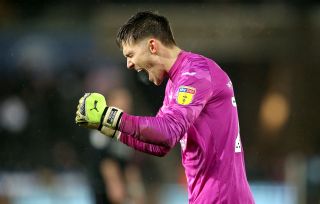 Freddie Woodman has set his sights on establishing himself as Newcastle’s first-choice keeper after signing a new three-year deal.

The 23-year-old, whose latest contract includes an option to extend, will spend next season on loan at Sky Bet Championship Swansea, for whom he made 43 starts during the last campaign before a hip injury ruled him out of the play-offs.

Woodman told NUFC TV: “It’s great news for me – I can look towards the future and see myself as a Newcastle player. It’s great for the club to commit to me and I can stay there another three years, which is huge.

“I see myself as a Newcastle player and my ultimate goal is to be the Newcastle number one, so hopefully I can do that.”

Woodman won the Under-20 World Cup with England in 2017 and the Under-21 international has trained with Gareth Southgate’s senior squad.