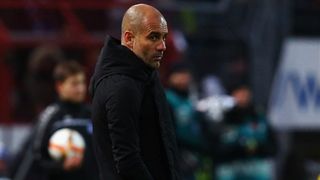 Bayern Munich coach Pep Guardiola sees no reason to panic ahead of next week's Bundesliga restart against Hamburg after the champions were surprisingly beaten by Karlsruhe in a friendly on Saturday.

The Allianz Arena side were defeated 2-1 at the Wildparkstadion, with Jerome Boateng sent off in the process, but Guardiola is not too worried about the result.

"When you analyse a period of two-and-a-half years, this simply can happen," he told reporters.

"It was the same in the first year, when we played against Red Bull Salzburg [a 3-0 defeat in January 2014]. The match against Salzburg was a friendly and afterwards we won in Monchengladbach.

"If you play a game every third day you sometimes have to fight. But in such matches you can improve the tactical play, one on one or the communication with the others.

"Football is a process and you have to make mistakes to be able to improve. It's not like you tell the players to do something and it immediately works.

"One day you win and another day you cannot win. We still have six days until the match against Hamburg."

Bayern lost Rafinha to injury during Saturday's encounter and Guardiola has admitted the Brazilian full-back's situation does worry him.

"I really hope that it does not turn out too bad and that he can train with us soon."