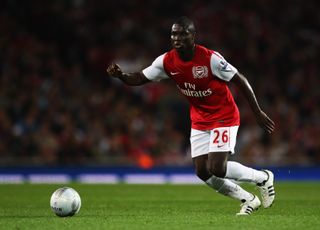 The midfielder caused controversy on Monday when responding to a question from a fan on Twitter over his lack of playing time at the Emirates Stadium this season.

When asked why he was not involved in the squad for Tuesday’s League Cup clash with Chelsea, he responded by tweeting: "LOL I wanna laugh" before reportedly adding "Sometimes I wish I was white and English. #realtalk"

Those comments drew plenty of attention, particularly in the wake of the recent race rows in football, including Yaya Toure’s claim that he was abused by CSKA Moscow fans during Manchester City’s UEFA Champions League victory in Russia last week.

However, Frimpong was quick to play down the comments, insisting that they had been taken out of context.

He is believed to have quickly deleted his initial posts, before tweeting: "Not every tweet is football related Goosh.

Later he subsequently wrote: "Look what ever you read tomorrow has majorly been twisted. Is a joke what people will do to start controversy goodnight people".

Arsenal have yet to make any comment on the matter, although prior to the midfielder's tweets boss Arsene Wenger had explained to the club's official website that Frimpong’s absence from the team to face Chelsea was because "he is still short of competition."