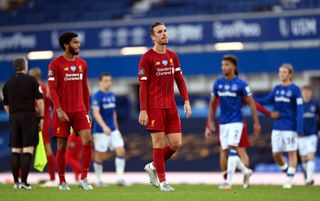 Liverpool’s 30-year wait for a top-flight title will take a little longer after a goalless draw in the 236th Merseyside derby still left them five points short of guaranteeing the trophy.

Despite Jurgen Klopp’s side dominating on their return to competitive action they managed just three shots on target – bizarrely the same number as their hosts.

That means their date with destiny will most likely have to wait until the trip to the Etihad Stadium on July 2, unless second-placed Manchester City slip up on Monday at home to Burnley.

It had been 103 days since Liverpool’s last match – the Champions League exit to Atletico Madrid – and the wait had obviously been preying on the mind of Sadio Mane, who in the absence of a not fully-fit Mohammed Salah was now the visitors’ main danger.

The Senegal international was so keen to get the derby off to a flying start that when referee Mike Dean blew his whistle and 21 players took the knee in support of the Black Lives Matter movement the forward instinctively shot off into the Everton half, having to quickly to retreat 10 yards to assume the position.

But while he was keen to make an early impact it was Richarlison who was first to threaten, with his strike from a narrow angle tipped away by Alisson Becker.

Klopp said the break had helped the Japan international’s further integration following his January transfer and the former RB Salzburg forward seemed much more comfortable in his surroundings.

Midfielder Naby Keita had also impressed the manager at Melwood and he transferred that to the competitive arena in a bright 45 minutes, taking a pass on the half-turn and and running at the defence on a number of occasions.

Everton’s response was to get more players behind the ball as they finished the first half with just 34 per cent possession – but they were lucky their opponents were still shaking off the rustiness.

Joel Matip, preferred to Joe Gomez as Virgil Van Dijk’s defensive partner, wasted the best chance when he planted a header wide from Trent Alexander-Arnold’s free-kick, with Roberto Firmino dragging a left-footed shot wide after Andre Gomes had been robbed by Minamino out wide.

Liverpool’s left-back issues – Andy Robertson will not be fit until Wenesday’s visit of Crystal Palace – were not helped by the loss of James Milner just before half-time to a hamstring injury, forcing Gomez to reprise a role he had not played since Brendan Rodgers was the Reds’ manager.

Alex Oxlade-Chamberlain replaced Minamino for the second half and Liverpool started to find a familiar rhythm and turn up the pressure, although Everton did not help themselves when Richarlison blazed over when put through by Dominic Calvert-Lewin.

Incredibly they had the two best chances in the remainder of the game in the same move, Calvert-Lewin’s backheel saved by Alisson and Tom Davies’ follow-up hitting the post.

Last season Everton fans celebrated the goalless draw at Goodison as the game which cost their arch-rivals the title, their last dropped points of the season seeing them finish second to Manchester City by a point.

But with their current 23-point advantage there will be no denying Liverpool this year as it only remains a case of when and not if, despite this stuttering restart.