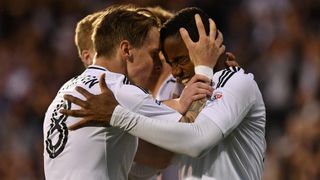 Fulham booked their place in the Championship play-off final with a 2-0 win over Derby County on Monday that sealed a 2-1 aggregate victory in the semi-final.

Gary Rowett's side won the first leg courtesy of a Cameron Jerome header but they were second best for the majority of the return fixture at Craven Cottage.

Ryan Sessegnon, named the division's player of the season last month, scored the first and set up Denis Odoi's decisive header to send Slavisa Jokanovic's into a meeting at Wembley with either Aston Villa or Middlesbrough.

Derby produced a dogged defensive effort to keep Fulham at bay during the first leg and Monday's fixture followed a similar pattern, with the hosts enjoying 67 per cent of possession and managing 10 shots on target to the visitors' one.

A stunning save from Scott Carson to deny Aleksandar Mitrovic kept the score at 0-0 at the interval, but Sessegnon punished a rare piece of slack defending two minutes into the second half, collecting a loose ball in the box and rifling high into the net.

The 17-year-old provided the telling assist 19 minutes later, bending a corner onto the head of Odoi, who glanced the ball over Carson and into the left-hand corner of the net to keep Fulham's promotion hopes alive for one more match.