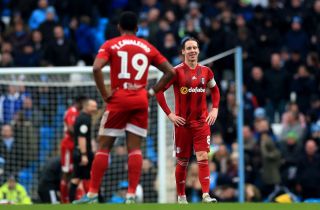 Scott Parker admitted his gameplan was ruined after just six minutes as Fulham were crushed 4-0 by holders Manchester City in the FA Cup.

The Championship side had little hope of containing the Premier League champions in their fourth-round tie at the Etihad Stadium after captain Tim Ream was sent off in the early stages.

Ilkay Gundogan struck from the resulting penalty, Bernardo Silva added a second and Jesus grabbed two in the second half for the hosts.

Fulham manager Parker said: “We understand the challenge ahead when you come to play a world-class team but the plan and preparation you do goes out of the window after six minutes when you go down to 10 men and they score a goal.

“It would have been a hard game with 11 men but with 10 it makes it even more difficult.

“But I am very proud. I have been in this job for a year and it was one of the proudest I have been of them.

“I asked the team to show personality and be brave. I saw a team which was committed and brave, putting themselves in positions and on offer to show what they are about.

“It would have been easy to come here, surrender possession, boot the ball as far from your goal and sit on the edge of your box. We lacked penetration but we showed a real identity.”

Fulham were always facing an uphill battle but Ream’s foul on Jesus in the opening moments made it doubly difficult. The American grabbed the City striker’s shoulder and pulled him back as he shaped to shoot, denying a clear goalscoring opportunity.

Parker said: “Tim Ream is obviously devastated. He has been immense for us this season. In heat of moment you make decisions and sometimes you make the wrong ones.”

City manager Pep Guardiola admitted his side were given a helping hand by the early sending off.

He said: “After one or two minutes I thought it would be a tough game.

“It is a team with a lot of courage but after the red card it was a little bit different. They could not run but they tried to play.

“The performance is difficult to analyse. If it had been 11 against 11, it would have been a tough game.”

City’s four goals took their tally for the campaign in all competitions to 102.

Guardiola said: “Always we have scored goals since we have been here. Always we have the ability to score. The problem is we concede a few in some games.

“The determination is always there. When we have any chances we are there.”

With an attendance of 39,223, the Etihad was some way short of capacity. Guardiola hopes it will be different as City host rivals Manchester United in the second leg of their Carabao Cup semi-final on Wednesday.

He said: “Now we have three days to prepare for United. Hopefully our fans can come and make our stadium full.”