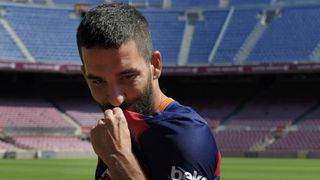 Turan moved to La Liga champions Barca from rivals Atletico Madrid for an initial fee of €34million last month, though the Turkey international midfielder is not eligible to make his debut until January due to the club's transfer ban.

Galatasaray, where Turan emerged from the youth ranks before joining Atletico in 2011, were considered a short-term solution for the 28-year-old.

However, at an event in Istanbul on Saturday, Turan said: "Galatasaray didn't try to take me on loan.

"To do that, they would have spent all of the money which they have reserved for the youth team and I don't want Galatasaray to spend a lot of money on me.

"Besides, Luis Enrique wants me to continue in Barcelona and be close to the team."

Barcelona were banned from signing players last April, after irregularities were found in their dealings at youth level by FIFA.

The club were sanctioned for breaching rules in 10 signings between 2009 and 2013.

"The days are flying past quickly in Barcelona. I thought that it might be difficult to go for six months without playing but I am trying to prepare myself for when I am finally able to play," added Turan, whose team-mates are preparing for the UEFA Super Cup against Sevilla on Tuesday.

"My team-mates are helping me and make me feel a part of the club. The months running up to January will be very different, but I will try to adapt to my situation.

"I'll feel a bit sad not being able to play until then but I have to look at the positive side and turn it to my advantage to prepare myself. I’ve dreamed about this since I was a kid."