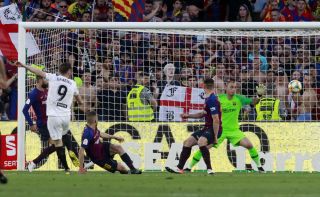 Valencia marked their centenary season in style by stunning Barcelona to win their first trophy since 2008 with a 2-1 victory in the Copa del Rey final.

Barca’s Champions League hangover showed no signs of lifting after that four-goal semi-final comeback victory by Liverpool at Anfield.

It meant a season which promised so much a month ago ended with just a league title, which was wrapped up on April 27.

Valencia, who finished fourth in LaLiga, 26 points behind Barca, took a 2-0 first-half lead through Kevin Gameiro and Rodrigo and even Lionel Messi could not rescue his side this time even though he scored the goal which set up a frantic finish.

Barca were aiming for an unprecedented fifth-successive Copa del Rey success, and seventh in 11 years, but never recovered from going behind.

Having comfortably won another domestic title, they put all their efforts into winning the Champions League and their failure to even reach the final after a 3-0 first-leg lead over Jurgen Klopp’s side appears to have weighed heavy on the players.

On the eve of the game Messi said: “It was a really big blow which we received at Anfield. It was tough to get back up. It was one of the worst experiences in my career.”

Little did he realise there would be more pain to follow in Real Betis’ Estadio Benito Villamarin in Seville, where temperatures at the 9pm local kick-off time were still around 30 degrees Celsius.

Valencia had just 23 per cent possession in the game but that was not the statistic which mattered, especially as, although their opponents registered 26 attempts, only six were on target in 90 minutes.

The fact Barca were missing Luis Suarez, who failed to recover from a knee operation in time, was a significant factor.

Gameiro took his tally to four goals in as many matches in the 21st minute, firing into the top corner after Ezequiel Garay cleverly cut back the ball.

Barcelona were reeling further when Carlos Soler broke down the right, outsprinting Jordi Alba, to tee up Rodrigo to plant a header past Jasper Cillessen.

Valencia’s two-goal half-time lead was the first against the 30-time winners in the final since Real Madrid in 1974.

However, Valencia were first to threaten again with Rodrigo having a shot saved before, 11 minutes in, Messi hit the crossbar after a one-two with Malcom.

It was a warning not heeded as Clement Lenglet’s header hit the post to allow Messi to tidy up and become the first player to score in six different Copa del Rey finals.

Valencia had 17 minutes to hang on and – despite everything thrown at them, including centre-back Gerard Pique playing up front – they held on to lift their first Copa del Rey in 11 years.