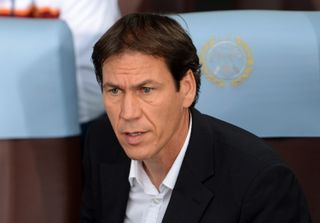 Brazilian full-back Maicon was sent off for a second bookable offence in the 66th minute on Sunday but Roma still managed to end Udinese's unbeaten home record as Michael Bradley came off the bench to score the winner and only goal of the game with eight minutes to play.

With talismanic captain Francesco Totti unavailable, as well as Gervinho, Garcia was thrilled with the way Roma responded after a poor first half and clinched their ninth consecutive victory to start the Serie A season.

Roma's win was the first by an away team at the Stadio Friuli in Udine since September 9, 2012.

"It's true that winning in this very difficult arena is impressive, as Udinese were unbeaten here in over a year," Garcia told Sky Sport Italia.

"Especially when down to 10 men this victory is very important for us and will be for our future too."

Bradley's goal capped off a flowing move through Udinese's defence with the American midfielder side-footing the ball home from the edge of the box.

It ensured Roma equalled the record set by Juventus in the 2005/06 season in winning the first nine games of the league campaign in Italy.

"The goal was wonderful, especially with that move when down to 10 men," Garcia said.

"More than in other games, today we needed fresh legs off the bench like Bradley and Marquinho.

"We had to remain dangerous and work even harder, playing to win even when a man down and that is a good sign.

"When you're a man down, it's important to keep the lines tight and focus on pace and set plays.

"You provoke good fortune, it doesn't just come to you.

"We were without Francesco Totti or Gervinho today, so everyone is important.

"The man on the bench today could be the starter tomorrow, so everyone has to be on their toes."