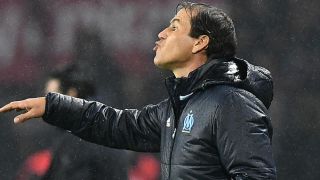 Marseille failed to register a shot on goal during the game on Sunday, but limited the Ligue 1 champions to few opportunities, with Edinson Cavani's late effort their only clear-cut opportunity.

Garcia was appointed on Thursday by new American owner Frank McCourt, and the ex-Roma coach said he was impressed by Marseille's organisation throughout the game.

"I asked for two things before the game - solidarity and cohesion. Both have been fully met.

"I don't think many people would have thought we'd finish this game with a draw."

He reserved special praise for the performances of Florian Thauvin and Rolando, the latter who he recalled to the starting line-up and shone at the heart of the Marseille defence.

"Florian Thauvin gave much of himself. He's a smart player who is in service of the team," Garcia said.

"Rolando was huge tonight. For a player without matches in his legs it was a big performance."