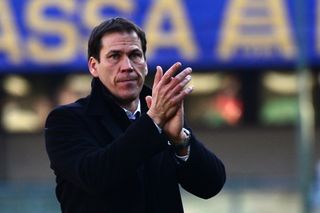 Adem Ljajic, Francesco Totti and the Ivorian struck to seal the win on Sunday and move the capital club to within six points of leaders Juventus.

Gervinho's display particularly impressed the head coach, who branded his performance as "devastating" before insisting that the former Arsenal striker could still improve.

"He can still do better," the 49-year-old said after the win. "He is helped by the fact the team has full faith in him, as that means he can play his game: targeting opponents in the one-on-one.

Garcia was pleased that his side were in ruthless form at the Stadio Marc'Antonio and kept the pressure on their Serie A title rivals after Napoli and Juve were held to draws on Saturday.

"We knew this was an important opportunity to take points off Napoli and Juve, so we made the most of it," he added.

"We saw during the week in the Coppa Italia that Juve are not unbeatable.

"Our destiny is not in our hands, but we must be ready to take advantage of their slip-ups and that's what we did today.

"I didn't like the first half, while after the break we kept it simple and had more movement. It wasn't easy to play here."