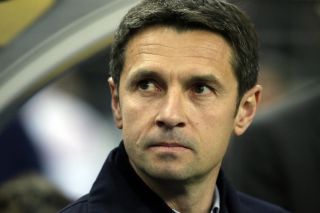 Garde's men were beaten by Paris Saint-Germain at the Stade de France on Saturday before being held to a goalless Ligue 1 draw at Toulouse in midweek.

With Lyon chasing Saint-Etienne for the final European spot and Christophe Galtier's men travelling to Evian on Saturday, a win over mid-table Bastia could move them up into fourth spot.

The Lyon boss was encouraged by his side's response to their cup disappointment in the stalemate against Toulouse, but hopes to be celebrating three points on Sunday.

"The losing finalists of the Coupe de la Ligue for several years had never taken a point from the game that followed," he said.

"We took a point from Toulouse with difficulty and with a bit of luck. Their victory would not have been undeserved but Lyon players held on to the end.

"But after this good point, the (week) improves with a win on Sunday."

Going into the final four games of the Ligue 1 campaign, Garde also urged his charges to focus on their own form rather than worrying about results elsewhere.

"I know the schedules of others, but especially ours," he added.

"The important thing is we act on what we can act on, not the results of Saint Etienne at Evian or (sixth-place) Marseille at Nantes.

"We must strive to take good care of legs and heads (and) recover mentally and physically."