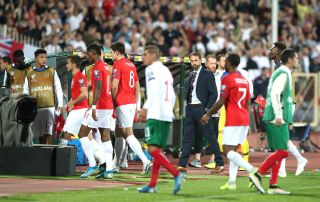 Gareth Southgate credited England’s players after they came through an “unacceptable situation” in Bulgaria having “raised the awareness of everyone” to racism.

The Three Lions emerged with a 6-0 win but the main talking point of the Euro 2020 qualifier in Sofia came off the pitch as home fans subjected England’s players to racist abuse.

England decided not to leave the pitch in protest and manager Southgate felt the stance was not only the right one but an effective one.

“We know it is an unacceptable situation,” he told ITV. “I think we have managed to make two statements by winning the game but also we have raised the awareness of everyone to this situation.

“The game was stopped twice and I know for some people that won’t be enough but I think as a group we were on board with that process.”

Manchester City forward Raheem Sterling was quick to take to social media to condemn the abuse.

Retweeting a news article in which Bulgaria coach Krasimir Balakov accused England of having a bigger racism problem than his own country, the Manchester City man commented: ” Mmmmh … Not sure about this one chief.”

He added: “Feeling sorry for Bulgaria to be represented by such idiots in their stadium. Anyway.. 6-0 and we go back home, at least we did our job. Safe travel to our fans, u guys did well”

Marcus Rashford also took to social media after the match, saying: “Not an easy situation to play in and not one which should be happening in 2019. Proud we rose above it to take three points but this needs stamping out.

Also been told what the Bulgaria captain did at half-time. To stand alone and do the right thing takes courage and acts like that shouldn’t go unnoticed. #NoToRacism— Marcus Rashford (@MarcusRashford) October 14, 2019

“Thankful to the brilliant England support. You got behind us in the most meaningful way possible tonight and we are all very grateful. Have a safe journey home and take care.”

Bulgaria captain Ivelin Popov was seen in a heated debate with a section of home supporters near the tunnel as the rest of the players headed for the dressing rooms at half-time.

Rashford added: “Also been told what the Bulgaria captain did at half-time. To stand alone and do the right thing takes courage and acts like that shouldn’t go unnoticed.”

The best way to bounce back. Proud of the team. There’s no place in football for that – disgraceful behaviour. Something must be done. 🏴󠁧󠁢󠁥󠁮󠁧󠁿 @England— Harry Maguire (@HarryMaguire93) October 14, 2019

Tyrone Mings, one of the targets for the abuse, admitted what should have been a special personal landmark was tarnished.

“It was a great occasion, I made my England debut, but it was slightly overshadowed by a few disappointing chants which were clear to hear on the pitch,” he told ITV.

“I thought we showed a great response, a good togetherness and ultimately we let the football do the talking.

“Hopefully the higher powers will deal with the incidents that happened, we couldn’t do much more on the pitch.”