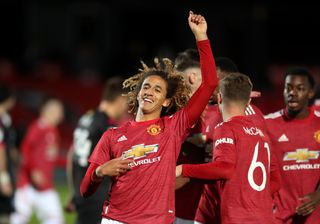 Manchester United greats Gary Neville and Ryan Giggs watched on as their Salford side were thrashed 6-0 by the Red Devils’ under-21 stars.

United’s ‘Class of 92′ members and co-owners of the League Two club were all in attendance in the stands at the Peninsula Stadium for the EFL Trophy clash.

They saw the emergence of a new crop of promising United youngsters, spearheaded by the impressive Hannibal Mejbri.

United have handled Mejbri with care since his arrival at the club. This was the first time he had featured in the competition since his move from Monaco a year ago and he opened the scoring after eight minutes.

Arnau Puigmal doubled the visitors’ lead on the half-hour mark before Mark Helm struck either side of a Charlie McCann strike in the second half.

Anthony Elanga made it six and completed the scoring after 74 minutes.