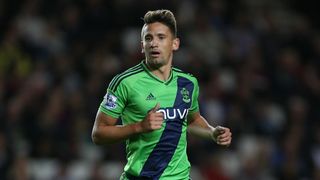 Middlesbrough have sealed the loan signing of playmaker Gaston Ramirez from Southampton until the end of the season.

Ramirez, 25, had only made three substitute appearances for Ronald Koeman's side in the Premier League this season and he spent most of last season on loan at Hull City.

The Uruguay international joined Southampton from Bologna in a deal reportedly worth £12 million in 2012 and will now continue his career in the Championship with Middlesbrough.

Boro head coach Aitor Karanka told the club's official website: "I am really pleased. He is a really good player who knows the league and the country.

"He has international experience and has played in the World Cup. He is another good player for us.

"He is the kind of player who wants to join us and that shows he is committed to us.

"He has played in the Premier League and I think it is important to bring in players with this kind of experience."

Ramirez, who has 34 caps for his country, joins a team in a strong position to win promotion this season. They are second in the table with 55 points, one adrift of leaders Hull with a game in hand.