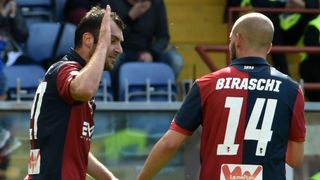 Former Inter striker Goran Pandev put a major dent in his old club's hopes of Europa League qualification by scoring the decisive goal in a priceless 1-0 win for Genoa, who survived a late penalty to cling on for the win.

Inter were on course for a goalless draw that would have done them few favours as they chase a top-six finish but Pandev pounced on a shot that rebounded off the crossbar in the 70th minute and scored his third goal of the season.

To make matters worse for the visitors, Antonio Candreva had a penalty saved by Eugenio Lamanna in the 87th minute before Geoffrey Kondogbia was sent off, leaving Stefano Pioli's men without a win in seven games and with just three matches left to haul themselves into the top six.

However, their performance at Stadio Communale Luigi Ferraris lacked the urgency they will need in order to leapfrog rivals AC Milan, who sit directly above them in the table with a three-point advantage ahead of hosting Roma later on Sunday.

Eder and Ivan Perisic went close in either half, while Roberto Gagliardini caused Genoa problems with his pace and movement, but leading goalscorer Mauro Icardi was kept quiet throughout the contest.

The win was only Genoa's second in their last 20 matches, and it ensured they remain 16th in the table, five points clear of the bottom three.

Despite their lowly position, the strugglers began brightly and Giovanni Simeone was about to convert a Luca Rigoni cross after five minutes when he went down under a challenge from behind by Gary Medel, but the referee judged the Chilean's tackle to be fair.

Having weathered a spell of early pressure, Inter went on the offensive and Kondogbia hammered a left-footed drive from 30 yards that flew just past the post in the 14th minute.

Still suffering from an injury sustained from the early tackle by Medel, Simeone was forced off in the 18th minute and Ivan Juric sent on Pandev, who shot tamely at Samir Handanovic within two minutes of his introduction.

It was not until just before the half-hour mark that Inter threatened again, and Lamanna made a brilliant one-handed save from Eder's low drive shortly before Candreva's deflected volley tested him again.

Ivan Perisic burst down the left flank five minutes before the break and his cross squirmed under the body of Lamanna but there was no Inter player there to turn the ball into the empty goal.

Genoa's Darko Lazovic caused havoc down the right early in the second half, and he won a free-kick that Miguel Veloso bent towards goal, drawing a strong two-handed save from Handanovic.

Perisic found himself one-on-one with Lamanna after he linked up well with Eder, but the Croatian's shot was too close to the goalkeeper who saved one-handed, before Genoa turned the match in a moment of drama.

Veloso unleashed a vicious drive that rattled the crossbar and Pandev was ideally placed to gleefully ram the rebound back past Handanovic with a left-footed shot.

Rigoni almost made it two from inside the box but his low shot was easily saved by Handanovic, before Pioli sent on Ever Banega to try and turn the match.

In a tense finale, Nicolas Burdisso was judged to have handled a Perisic shot on its way towards goal but Lamanna saved Candreva's low attempt, sending the Genoa faithful wild and securing three points for his side before Kondogbia received his marching orders for dissent to sum up a miserable outing for Inter.