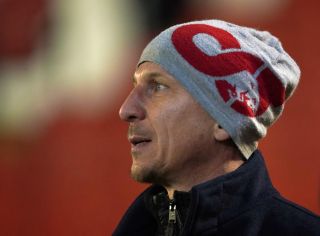 Barnsley manager Gerhard Struber praised his side’s attitude and energy after Conor Chaplin’s goal earned them a 1-0 win against Middlesbrough.

The result means that Boro are now without a win in their last 10 games in all competitions.

Boro’s Lewis Wing threatened early on with a shot from inside the area which was blocked by Aapo Halme.

Wing fired wide from around 25 yards before he posed another threat early in the second half with a free-kick, which was deflected wide off the defensive wall.

The winner came in the 73rd minute when Chaplin scored at the second attempt, firing into the net after his shot on the turn inside the area saw the ball come back off the crossbar.

Struber said: “I’m very happy. It is very important in our situation to pick up points and also that we create a very good performance together.

“The attitude and the energy was amazing and I’m very proud of my team today. I hope we can bring this energy in the next few weeks.

“We believe in us and we were very clear in our plan on the ball today. We had a different formation and my three centre-backs created a special performance.

“We celebrate a big win against a very good team. In the whole league, they have two strikers with very big quality and my three centre-backs gave them no chance.

“Conor is a top player for us. He scored and he works so hard. The whole team worked very strong together. Two clean sheets in a row and two victories.

“The atmosphere in the dressing room was always OK. Right now it is top.”

The visiting supporters made their views clear at the final whistle with chants of “you’re not fit to wear the shirt” echoing around the stadium as the players left the pitch and headed towards the tunnel.

Middlesbrough boss Jonathan Woodgate said: “They played well and we weren’t great at times in the game. It was a really disappointing result for us.

“We didn’t create any opportunities. We lacked that belief to really create chances.

“We had a big following today and we didn’t give them anything. We should be doing better. We want to get more points than we have done recently.

“We went through that spell where we were playing really well and got ourselves 10 points clear. Now we’re three off it so we need to start winning games quick.

“We’ve been in a relegation place before and put a run together of four games on the spin, which I’m hoping and believing we will do again.

“It was absolutely fantastic support and I don’t blame them for being angry and going crazy. I expect that if we don’t win games like that.

“We’re going to get hard times. The fans are just as frustrated as we are so we just have to take it on the chin. We need to start winning games sharpish.”