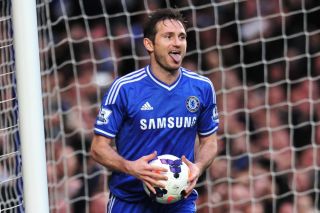 But Gerrard's long-time England team-mate will be doing him no favours when the sides clash in a key league encounter at Anfield on Sunday.

A Liverpool win would end Chelsea's title chances and see Brendan Rodgers' side close in on a first league crown in 24 years.

Lampard said that while Gerrard deserved a league title, Chelsea still held hopes of finishing top of the table.

"Stevie will go down as a great player no matter what. He has won pretty much everything there is going," Lampard said.

"He will be striving to win the league because that is the one little space in his trophy cabinet.

"As a player he deserves that – but there is no sentiment from us. We want to win it.

"We respect the fact that Stevie is a great player, but I don't think that he lives or dies on whether they win the title this year or not."

A league title has eluded Gerrard throughout his illustrious career, which has included a UEFA Champions League win and several cups.

Chelsea manager Jose Mourinho has played his usual mind games in the lead-up to Sunday's clash, suggesting he will use 'kids' as he focuses on his team's UEFA Champions League semi-final.

Lampard said Chelsea had the depth to compete in both competitions, with their Champions League semi-final against Atletico Madrid in the balance after a 0-0 draw in Spain in the first leg.

"They are a tough two matches," he said.

"But if you want to fight on different levels you have to be big enough as a squad to stand up and do it.

"Now it is up to the manager how he ducks and dives with both squads. We haven't given up on the league.

"You can’t when there are nine points to play for. All we can do is try to win the three league games and hope results go our way."