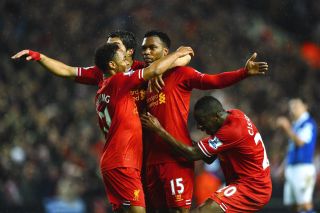 Sturridge scored twice in as many first half minutes as Liverpool thrashed their neighbours from across Stanley Park 4-0 at Anfield.

Gerrard headed Liverpool in front and Luis Suarez's 23rd goal of the season early in the second half left Everton stunned.

England striker Sturridge has now scored six goals in his last five games and 16 for the season but spurned a chance to complete his hat-trick when put a penalty into The Kop after Suarez had struck Liverpool's fourth.

Everton were unable to live with Liverpool's attacking threat and Gerrard hailed Sturridge's contribution after he produced two clinical finishes in an outstanding display.

He told BT Sport: "Daniel was magnificent, he absolutely destroyed them first half and the third goal killed Everton, it knocks the stuffing out of them.

"Then we knew we could hit them on the break and it worked a treated."

The England skipper also revealed he relinquished his penalty-taking duties to allow Sturridge the chance to complete his hat-trick.

He said: "I'll take responsibility for that, I've scored a hat-trick against Everton and wanted Daniel to experience that feeling."

Victory for fourth-placed Liverpool moves them three points clear of Tottenham and four better off than Everton.