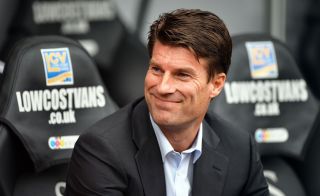 Laudrup was manager of Getafe from July 2007 to June 2008 and guided them to a 14th-placed finish in the top flight during his only season in charge.

Under Frank Rijkaard, Barcelona finished third in 2007-08 behind Real Madrid and Villarreal – their lowest finish in five years – and president Joan Laporta decided a change was needed to turn their fortunes around.

Torres wanted to keep the Dane at Getafe, but the 49-year-old had made his mind up to leave once he knew of interest from Barca, although they eventually turned to Guardiola.

"Laudrup decided not to go with us because in the spring of 2008 (he) spoke with (then Barca director of football) Txiki Begiristain," Torres is quoted as saying in an extract of forthcoming Danish book about Laudrup 'A Gentleman in New Clothes', which is being serialised in Mundo Deportivo.

"Initially Barcelona wanted (him to) replace (Frank) Rijkaard, that is what the president (Laporta) wanted.

"Txiki said that Laudrup was one of the technicians handled ahead of next season."

After missing out on the job at Camp Nou, Laudrup went on to Spartak Moscow instead, before heading back to Spain with Mallorca and latterly to the Premier League with Swansea City.