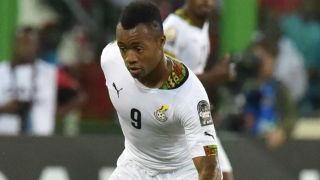 Ghana edged into the third round of World Cup 2018 qualifying with Mubarak Wakaso and Jordan Ayew on target in a 2-0 victory over Comoros in Kumasi.

Comoros, sat 147 places below Ghana in the FIFA rankings, held Avram Grant's side to a goalless draw in the first leg and were hoping to pull off a shock result in the return fixture.

Despite their well-organised display, Wakaso's first-half free-kick was added to by Jordan Ayew in the closing stages after Comoros had been reduced to 10 men.

The game began at a high tempo, but Emmanuel Agyemang-Badu failed to give Ghana an early lead when he sliced a powerful shot wide from no more than 10 yards out.

Comoros looked dangerous on the counter-attack and Ali M'Madi's 25-yard strike forced an unorthodox save from Brimah Razak.

But Ghana's nerves were eased in the 18th minute when Wakaso curled a 20-yard free-kick into the top corner, leaving Salim Ben Boina rooted to the spot.

Midway through the half Andre Ayew's cross from the left was headed narrowly wide by Asamoah Gyan, the captain failing to double his team's advantage.

Grant's side monopolised possession but struggled to create further opportunities against the well-organised Comoros.

There was another scare for Ghana – who had Jonathan Mensah and Solomon Asante forced off through injury – in first-half stoppage time but Chaker Alhadhur's 25-yard drive was kept out of the top corner by Razak.

Six minutes after the interval Gyan got in behind the Comoros defence and, despite beating Ben Boina, saw his shot curl wide.

Grant's team lacked creativity in the final third and Comoros continued to pose a threat on the break, but their hopes of an equaliser were dashed in the 73rd minute when Omar Mdahoma received a second yellow card.

Jordan Ayew rattled the post in the closing stages but picked out the top corner five minutes from time to lift the tension and ensure Ghana progressed to the next stage of CAF qualifying.