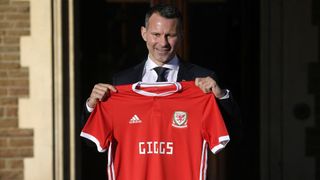 New Wales manager Ryan Giggs revealed he underwent counselling after his career at Manchester United came to an end.

He then spent two years on the coaching staff at United before Jose Mourinho's arrival as manager forced his exit, which took a psychological toll on the former winger.

"I saw a psychologist when I left United because I had been straight from school into being an apprentice," Giggs said.

"It was the same thing every day, going into Manchester United with a structure, and that was no longer going to be the case.

"I was about to start a new chapter where some of my days I wouldn't be doing anything.

"I sought someone's help regarding that and it was just about managing your week or day.

"I had never needed a psychologist while I was playing. But it was little things. You don't just go to the gym around the corner.

"It helped because I was going into the unknown.

"It opens your eyes because there is a big old world out there other than football.

"Rather than fearing it, I enjoyed it, but I missed football and am glad to be back."

Giggs' first match as Wales boss comes in March in the China Cup and he added: "I can't wait to get started - it is frustrating I have to wait until March for my first game."