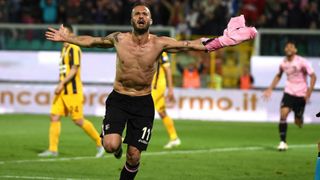 Empoli have confirmed the signing of veteran striker Alberto Gilardino on a two-year contract.

The 34-year-old scored 10 league goals for Palermo last season as they battled successfully against relegation from Serie A.

The former AC Milan and Fiorentina striker, who won the World Cup with Italy in 2006, has now agreed a deal to join Empoli for an undisclosed fee.

"Empoli announces it has acquired outright the performance rights of the player Alberto Gilardino," a club statement released on Thursday confirmed. "The forward has signed a contract until June 30, 2018."

Empoli will become the sixth club Gilardino has played for since January 2012.

He had a spell on loan with Bologna after joining Genoa, before short stints with Guangzhou Evergrande and former club Fiorentina prior to his move to Palermo last year.