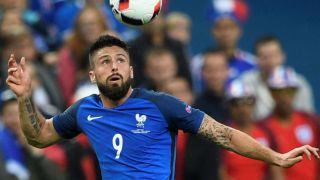 Olivier Giroud urged his team-mates to repeat the ruthless first-half display from the 5-2 quarter-final win over Iceland when Euro 2016 hosts France face Germany in the last four.

Often slow starters at the tournament, France put an end to that with a clinical display, Giroud netting a brace - the first of which came after just 12 minutes - as Paul Pogba, Dimitri Payet and Antoine Griezmann also got on the scoresheet, building a 4-0 lead at half-time on the way to a convincing victory.

The Arsenal striker, who won man of the match for his display, told reporters after the game: "From my perspective I am pleased, no more than that. I am very happy for the team, my family and the French public as a whole.

"I don't know whether that is my best performance for France, I have had other good games. But out of the 2014 World Cup and Euro 2016 it is probably my best in a major tournament.

"I felt really good physically right from the start of the match. We are used to making bad starts to matches and we changed that. We need to retain that.

"We were on top form the first minute and we were very clinical."

While Giroud was happy to see France avoid another slow start against Iceland, he admitted the prospect of world champions Germany in the semi-final is a completely different proposition.

"They are the world champions and they are often in the last four of major tournaments," he said.

"We have a lot of desire to try and get our own back for what happened in the World Cup [a 1-0 quarter-final defeat in 2014]. We beat them here in a friendly [2-0 in November] but it will be completely different.

"I hope in Marseille the French public are as excitable as they were [in Paris against Iceland] and will support us all the way.

"We are lucky enough to play a semi-final in front of a home crowd.

"I am very proud of what this side is achieving and I hope that once again we will come up with the right result."