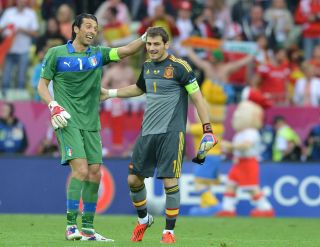 The Spain international lost his place as Real's number one to Diego Lopez under Jose Mourinho last season, and has thus far been unable to displace the former Villarreal stopper under new incumbent Carlo Ancelotti.

The 32-year-old has revealed his preference to remain in the Spanish capital for the foreseeable future, but admitted he could be forced to consider his position if he is unable to regain his starting spot.

Casillas has been utilised in the UEFA Champions League victories over Galatasaray and Copenhagen this season, and is set to take to the field in Wednesday's showdown with Juventus at the Bernabeu.

And Buffon is surprised to see Casillas occupying a place among the substitutes, but believes his reaction to losing his spot in the team is great testament to his character.

"I admire Iker a lot," he told Marca. "Even more so now with everything that is going on.

"Casillas' reaction to it all as a man is just fantastic and I believe that he is now even greater than before.

"It's odd having to see him on the bench, but you also have to fully respect Diego Lopez, who is a phenomenal goalkeeper."