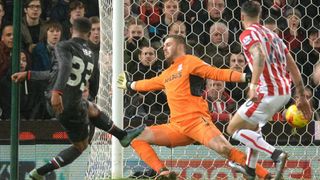 Liverpool match-winner Jordon Ibe called on his team-mates to finish the job after their 1-0 win over Stoke City in the first leg of the League Cup semi-final.

The winger came off the bench in the first half to score with a cool finish after Joe Allen had appeared to slice a shot into his path after good work from Adam Lallana to create the opening.

Liverpool and Stoke meet again on January 26 in the second leg at Anfield, with the winners taking on Everton or Manchester City at Wembley – a target that Ibe has in his sights.

"I am enjoying it," the goalscorer said to Sky Sports of his success in this season's competition.

"It was a great pass form Adam Lallana. I was just pleased for us to get the result and hopefully we can take it back to Anfield and win.

"It is very important for us to try and win a medal this season, so we just need to keep going and hopefully do well in the Premier League as well."

When asked if he thought Allen had passed or shot into his path, Ibe added: "I am not too sure. I think he was trying to get the shot off, but it was good that we got the goal."

Philippe Coutinho and Dejan Lovren suffered hamstring injuries, meaning Lucas Leiva had to step in and play at centre-back alongside Kolo Toure.

The 28-year-old Lucas was more than happy to take that step for manager Jurgen Klopp and praised his team's all-round performance.

Lucas said: "I think it is clear we had to change something from the West Ham game and we started well from the first minute. When we start well, we always play well and it was the case.

"We had some bad luck with injuries early on but we managed to keep a clean sheet, score an away goal and now we go for the second leg trying to get to Wembley.

"With [Jon] Walters and [Peter] Crouch late on it is always hard [to cope at centre-back], but it is a position I have played in a few games this season and if the manager needs me, I need to deliver.

"I think as a team we worked really good. When we are aggressive and we do what we have to do, we play well."

Liverpool are back in action with an away game against League Two outfit Exeter City in the FA Cup on Friday.