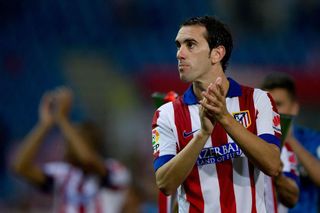 Uruguayan defender Diego Godin has put an end to speculation surrounding his future after agreeing a new four-year deal at Atletico Madrid, the Spanish club announced on Thursday.

Premier League side Manchester City were reportedly among the frontrunners for the centre-back's signature, but on the back of Nicolas Otamendi heading to the Etihad Stadium, Godin has pledged his future to Atletico.

The former Villarreal star joined Atletico for a reported for a reported €12 million in August 2010 and has gone on to play over 200 times for them in all competitions.

Since his arrival at the Vicente Calderon, Godin has won no less than six trophies, including the 2013-14 La Liga title in which he and centre-back partner Miranda played a crucial role.

Brazilian Miranda left for Inter during the close season and Godin was often tipped to follow him out of the door, with €40m moves to the Premier League mooted.

But the Uruguay captain has ended all doubt by signing his new deal and will remain tied to the club until 2019.