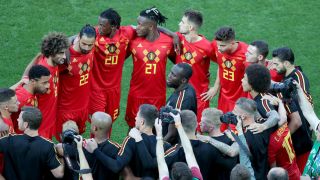 Whisper it, if you have to. Better yet, mouth it, but don't say it out loud.

It's the dirtiest word you can use to describe a group of talented players blossoming simultaneously.

The mere mention of it invokes a shudder in England and in Portugal, where the loaded term came to prominence in describing the teams that won the FIFA Youth Championships in 1989 and 1991.

The Selecao's glittering crop, headlined by Luis Figo and Rui Costa, could not win the senior international tournament that such talent suggested was theirs by right.

Instead, it took an altogether less glamorous side, missing talisman Cristiano Ronaldo for much of the final due to injury, to end Portugal's wait by huffing and puffing their way to Euro 2016 glory.

In England, there has been no such unexpected triumph to offset the disappointment of prior underachievement.

After reaching the semi-finals of the World Cup in 1990 and the last four of the European Championship on home soil six years later, a glowing clutch of blooming brilliance was expected to swiftly surpass those near misses and end the mounting years of hurt.

Instead, David Beckham, Frank Lampard, Steven Gerrard, Wayne Rooney and the rest could only manage the familiar fate of quarter-final penalty shoot-out heartache in Euro 2004 and the World Cup in 2006, before failing to even qualify for Euro 2008 and lumbering to an inevitable round-of-16 demise at the hands of Germany in South Africa in 2010.

Now it is the turn of Belgium to be burdened by the label.

It was in the lead-up to the World Cup in Brazil four years ago that we first sat up and really took notice of the extraordinary depth of talent available to Marc Wilmots, and which only appeared set to become stronger with each passing tournament.

Defeat to unheralded Wales at the same stage of Euro 2016 was less acceptable, particularly given the manner in which such a gifted team laboured under Wilmots in France.

Since August of that year, it has been the task of former Swansea City, Wigan Athletic and Everton manger Roberto Martinez to polish Belgium's golden generation sufficiently for them to fulfil their exceptional promise at this World Cup.

So far, so good in Russia. Convincing victories over Panama and Tunisia, 3-0 and 5-2 respectively, secured passage to the round of 16.

And Belgium's reserves then won a meeting with a similarly fringe England side 1-0 to seal top spot and a 100 per cent record.

Now Japan stand in the path of another appearance in the quarter-finals, where Brazil or Mexico will lie in wait.

Seeking to release at least some of the pressure continually building around his squad, Martinez tried to claim after the win over Gareth Southgate's side in Kaliningrad that this is hardly the last opportunity for Belgium to make an impact on the big stage.

"The so-called 'golden generation' weren't playing, only a few, and there were young players that showed they're ready to contribute," he said of his much-changed team.

"We're a country of 11 million and we keep producing players like Youri Tielemans, 21, [who] played in the manner that he did, and Adnan Januzaj, young players that are coming into an environment that is very different than they're used to.

"Every player is involved and it's a responsibility that everyone wants to share. 'Golden Generation' is a name for a group of players who really enjoy working for the national team and want to take us as far as they can."

Attempting to reframe the context of the terminology will not excuse Martinez the inevitable condemnation should Belgium fail to dispatch a flawed but potentially dangerous Japan in Rostov-on-Don.

If they do progress, noble failure against perennial World Cup powerhouse Brazil in the last eight could perhaps be excused.

But what is not in doubt is the extraordinary weight of expectation that will rest on the shoulders of the 11 players picked from kick-off at Rostov Area on Monday.

And no matter how Martinez attempts to evade the expensive elephant in the room, mere glitter, shine and bling simply will not do. Only a 24-karat performance can suffice.