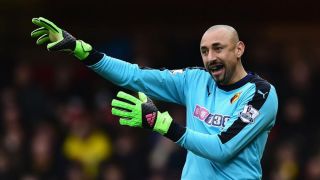 The Brazilian, whose contract runs until 2018,  kept 11 clean sheets in 38 league appearances in 2015-16 and was crowned the Vicarage Road outfit's player of the season.

The 35-year-old was also recognised by the club for his heroics in a 1-0 win at West Brom, a match in which he saved two penalties.

Gomes has made 83 appearances since arriving from Tottenham in May 2014 and was part of the squad that saw Watford promoted from the Championship ahead of last season.

Prior to joining Tottenham, Gomes played for Cruzeiro and PSV and also spent a loan spell at Hoffenheim during his time at White Hart Lane.