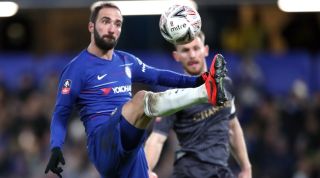 The outspoken right-wing politician made his comments in the wake of the 31-year-old’s move to Stamford Bridge, which came just half a season after his arrival at San Siro on loan from Juventus.

Salvini had already spoken of his happiness at seeing the back of the Argentina international, who scored six Serie A goals in 15 games for the Rossoneri this season, and hit out again on Monday.

“He behaved disgracefully and I don’t like mercenaries, but we’ve become very competitive without him.”

Higuain made his Chelsea debut in Sunday's 3-0 FA Cup win over Sheffield Wednesday, playing for 82 minutes before being replaced by Olivier Giroud.