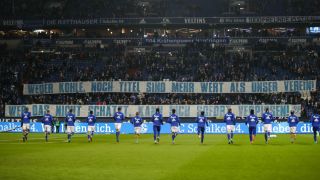 Leon Goretzka understands why Schalke fans turned on him after his impending move to Bayern Munich was confirmed.

Germany midfielder Goretzka will join Bundesliga champions Bayern when his contract expires at the end of this season, having finalised a four-year deal at the Allianz Arena last week.

Fans at the Veltins Arena did not take kindly to their hero's widely anticipated defection and unveiled banners to fiercely criticise the 22-year-old ahead of the 1-1 draw against Hannover.

One read: "Neither money nor trophies are worth more than our club. The one who does not appreciate that can f*** off immediately."

A second banner declared: "Let down 1000 friends for emotionless trophies and superficial popinjays."

Goretzka was booed when he was substituted after 63 minutes and told Sky: "When your own fans are whistling against you it always hurts. But I expected the whistles and I can understand them partially.

"These days have been the most difficult of my career. It was a special situation for me. I'm glad that the atmosphere remained positive overall. The boos hurt, of course."

He added: "I thought so long about my decision. It was a long process. I listened to myself then decided where I wanted to go and where my goals are."