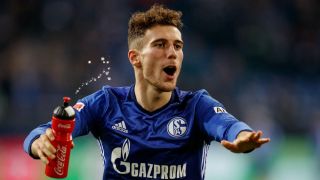 Leon Goretzka's first Schalke start in 93 days was met with a banner held up by fans that appeared to criticise him for agreeing a move to Bayern Munich.

Germany international Goretzka will join Bundesliga champions Bayern when his contract expires at the end of the season, the impending free transfer having been announced on Friday.

The 22-year-old asked supporters not to turn on him, but his first start since October was met with a large sign in the Veltins Arena that read: "Neither money nor trophies are worth more than our club. The one who does not appreciate that can f*** off immediately."

Goretzka sustained a stress fracture to his leg in November, making two appearances as a substitute before suffering a recurrence of the injury early in December.

He started in midfield against Hannover on Sunday, with Schalke searching for a win that would lift them to second, 13 points behind leaders Bayern.

Coach Domenico Tedesco also handed a first start to Marko Pjaca, who has joined on loan from Juventus.