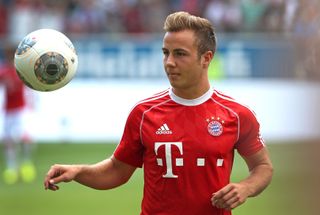 Gotze has made just one brief substitute appearance for the Bavarians since his €37million switch from Borussia Dortmund in July, having torn his hamstring prior to his arrival.

And the Germany international believes he may struggle for sharpness during his first outings for his new club.

"Obviously it takes time to find my rhythm and be playing at 100 per cent again," he said.

"It requires training and match minutes to get myself into my rhythm again. Actually, I think I'll be back in form in two, three, or four weeks time."

"Of course its going to be a tough match again. We have shown in the first two match how close it is," he added.

"We are all looking forward to the three match - especially I'm very keen as I'm coming back slowly. I hope I'll get some match time, let's see.

"I think we have two important league matches and then the Super Cup final. We will try our best to win this title, but as I mentioned before, there are two previous matches to be played and focused on."

Gotze's team-mate Arjen Robben is also predicting a testing encounter against their Bavarian neighbours at the Allianz Arena, as Pep Guardiola's men look to make it three wins from three games in the German top flight.

"Yeah, obviously it's an important match for the fans in particular. But for us it's just a game in order to win and proceed. Derby games are always tense, but we want to win and we will try everything," he said.

"It's good to have some space left to improve. Otherwise you wont have anything to improve on. Its nothing unusual, for us it was important to win the first two matches, six points is what counts.

"Obviously there are things left to adjust, but we are on track and in a good position."