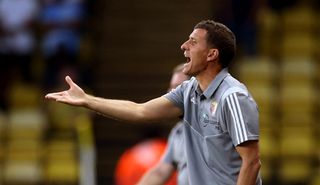 Watford boss Javi Gracia has called on the senior players in his struggling side to step up in the absence of injured captain Troy Deeney.

Deeney underwent knee surgery last week and is set for at least two months on the sidelines.

His absence has been keenly felt by the Hornets, who have lost their opening three Premier League matches and will be out to stop the rot when they travel to Newcastle on Saturday.

But Gracia knows his rock-bottom side will have to learn to cope without him – and quickly.

“It’s true Troy is very important for us, he’s our captain, but we have other players with experience, with character and we need them in this moment,” he said on the club website.

“For that reason I’d like to speak about the team – not one player. We need that solidarity and spirit if we want to achieve things.”

Watford claimed a much-needed win when they defeated Coventry 3-0 in the Carabao Cup in midweek, with summer signings Danny Welbeck and Ismaila Sarr staking their claims for a first league start.

“They need time to show their best quality, their best condition, but in this moment we need all of them. We will see and decide if they start or play some minutes.”