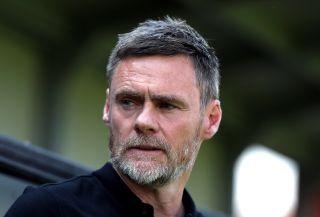 Salford boss Graham Alexander admitted his side were given a lesson at both ends of the pitch after they were thumped 6-0 by Manchester United’s under-21s.

United greats Gary Neville and Ryan Giggs, the ‘Class of 92’ members and co-owners of the League Two club, were in the stands at the Peninsula Stadium for the EFL Trophy clash.

They saw the emergence of a new crop of promising United youngsters,
spearheaded by the impressive Hannibal Mejbri, who opened the scoring after eight minutes.

Arnau Puigmal doubled the visitors’ lead on the half-hour mark before Mark Helm struck either side of a Charlie McCann goal in the second half.

Anthony Elanga made it six after 74 minutes to complete Salford’s misery.

Alexander told the club website: “I think it was a lesson for all of us to be honest. The game starts in your mind.

“But it was valuable experience for the young players, I didn’t see them dropping their heads or not playing right until the end.

“I thought the first two goals were decent quality for their side. The one straight after half-time summed up our night, a free header from a lad who’s about 5ft 9in. That goal summed up our defensive performance.

“We didn’t create enough and when we did we weren’t clinical enough. They were clinical. They only had seven shots on target and scored with six of them.”