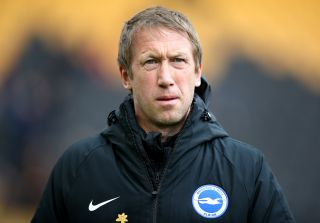 Graham Potter says Brighton must swiftly move on from successive home defeats to “the three best teams in the country” as they attempt to banish any lingering Premier League relegation fears.

Albion were thrashed 5-0 by Manchester City on Saturday evening on the back of Amex Stadium losses to Manchester United and champions Liverpool.

Despite those setbacks, the Seagulls have been in decent form since top-flight action resumed and hold a healthy eight-point advantage over the drop zone going into their final three games.

Seagulls boss Potter will not be satisfied until safety is mathematically assured and admits last weekend’s 1-0 win at bottom club Norwich could prove crucial.

“There’s a big challenge when you play those types of teams so quickly and we just have to dust ourselves down,” said Potter of the defeats to City, Liverpool and United.

“The boys’ character and resilience is there, we need to focus on the next three matches and try and get as many points as we can.

“We knew it was going to be a challenge, that’s why I think the Norwich one was such a big one for us in terms of getting the three points.

“And then the quality of the opposition – the three best teams in the country – so of course they are going to test you psychologically and I think it’s just about perspective all the time for us.

“We still need points, from my perspective. We’re still fighting for those.

“We’ve got seven points post-lockdown and we have to try to focus on getting as many as we can from the remaining three.”

Brighton are bidding to secure a fourth successive season in the top flight following promotion in 2017.

Albion travel along the south coast to Southampton on Thursday evening before hosting Newcastle four days later and completing the campaign at Burnley on July 26.