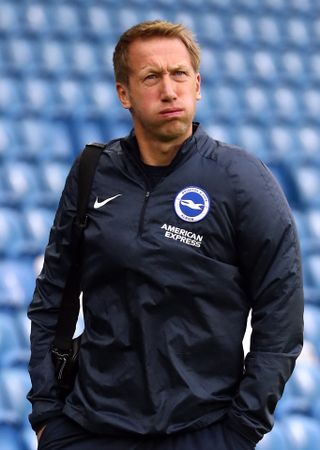 Graham Potter has compared Premier League management to “fixing a plane while it’s up in the air” as he looks to avoid a turbulent end to his first season in charge of Brighton.

Victory over Norwich last time out lifted the Seagulls nine points clear of the relegation zone with five games to go, but they host Liverpool and Manchester City in the space of four days this week.

Brighton have already matched their 2018-19 points total in Potter’s maiden campaign, but the former Swansea boss says that, even with top-flight safety in sight, he cannot stand still in pursuit of improvement.

“I think we’re at the start of a process,” he said. “The first year can be quite tricky.

“You’ve got a foundation but you’re also trying to change, so you have to be careful with what you’re doing, especially in the Premier League.

“I think the saying ‘fixing the plane while it’s up in the air’ is a good one, because it’s the toughest league in the world.

“We’ve done some things well. You make mistakes and try to improve. You try to get better.

“The idea has been there throughout but we need to get better at executing it.”

Asked whether it would take a couple of transfer windows to further put his stamp on the side, Potter added: “As coaches we all want more time and more resources, but I’ve got to this point by getting the most out of the players I have and trying to get the most out of those.

“I think we can improve regardless of what we do in the transfer window.”

Potter insisted that despite what is expected to be a quick turnaround between the end of the current campaign and the start of the next, he has not yet given the 2020-21 season a thought.

“We have people who can plan things in terms of what we’re going to do pre-season and when we’re back and that type of stuff, but I’ve just been focusing on the games that we need to play,” he added.

“It’s not that big a deal and we all understand why the situation is what it is, so we just have to adapt and work with what we have to work with.”

Potter also paid tribute to Wednesday’s visitors, who have already wrapped up their first league title since 1990.

“Jurgen (Klopp)’s built a fantastic team there,” said Potter. “There’s a spirit and togetherness there and a relentless push for winning football matches.

“The fact they can not feel sorry for themselves (after missing out to Manchester City last season), take the disappointment and then go again is one that we should all admire.”

Long-term absentee Jose Izquierdo remains sidelined for the clash with the Reds, while the club are regularly assessing the fitness of Steven Alzate, who had a minor groin procedure delayed during lockdown.