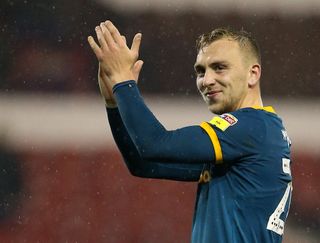 Hull head coach Grant McCann believes Jarrod Bowen “is the best in this league” after he scored twice in the 2-0 win at home to Derby.

Bowen had played for most of the game up front, but Derby were floored once he was switched to a more accustomed position on the wing.

“Anywhere he plays he’ll have an effect on the game. He delivers every weekend and, for me, he’s the best.

“He’s grounded. It’s not me over-hyping him, it’s there in black and white for everyone to see.

“We feel as if he’s getting better and better all the time. He’s the best in this league – honestly, he really is.

“He wants to play at the top level and hopefully it’s with us.”

Hull, who have had a fine week following their victory at Nottingham Forest on Wednesday, just about deserved the win against a Derby side who continue to struggle on their travels.

The visitors had a goal disallowed after 56 minutes, when Tom Lawrence was adjudged to have fouled Eric Lichaj.

But Hull kicked on thereafter and made the breakthrough in the 74th minute when Bowen headed home Leo Lopes’ perfect cross towards the far post.

And once Bowen scored an easy second after 80 minutes, Kamil Grosicki this time the provider, there was only ever going to be one outcome.

McCann said: “I thought it was a good performance. We were playing against a very good team.

“Defensively, I felt we kept our shape well and on transition, when we won it back, I thought the front four were excellent.

“In the first half we didn’t take our chances – in the second half we showed a more clinical edge.

“We are pleased. It’s been a really good reaction from the last home game against QPR, when we lost 3-2.

“We’re probably not where we want to be – we want to be a lot higher. It’s all about momentum – every manager in this league is searching for momentum.”

He said: “I’ve seen many goals in the Championship and the Premier League that are given in this way.

“He didn’t give it and it was a decisive moment. If we had scored the goal we would have won the game – it would have given us more energy and power.”

Derby have not won away in the league since the opening weekend of the season, but Cocu added: “I think we played a good game.

“I thought we played well and dominated most of the game. Their plan was clear, but only a few moments they got dangerous when we lost the ball.

“We didn’t have the power to get back into the game, but I was happy about how we played and the initiative we had.

“We have to learn as a team. We have to be more clever. If we are not able to win, then we don’t lose and keep a clean sheet. But, in the end, it is about getting results.”