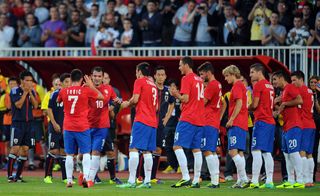 Stankovic came out of retirement to captain his country, playing the first 11 minutes in Novi Sad before being withdrawn.

The appearance moved the 35-year-old to 103 caps, with Serbia going on to win 2-0 courtesy of second-half goals from Dusan Tadic and Milos Jojic.

The former Inter midfielder - who announced his retirement at the end of the season following nine years at San Siro -  said he was grateful to lead his country out on his final appearance for the national team.

"Every game I played (has been) sublimed by these wonderful last 10 minutes and I can only thank everyone who turned up to make it a memorable afternoon," Stankovic told Serbian television.

"There were ups and downs, trials and tribulations and I am just grateful I could put on the captain's armband one last time."

Stankovic appeared at three FIFA World Cup finals during his international career, representing Yugoslavia in 1998, Serbia and Montenegro in 2006 and Serbia in 2010.

He also won six Italian titles during spells with Inter and Lazio, as well as lifting the UEFA Champions League with the former.

Serbia coach Sinisa Mihajlovic, a team-mate of Stankovic at Inter and Lazio, paid tribute to the midfielder's commitment.

"Stankovic gave his entire self to the national team and I am delighted that he has become our most capped player," he said.